Our California after replacing the cranks, tires, and captain’s seatpost, handlebar and stem.

In my earlier rundown of the Micargi California tandem’s provided components I identified the drivetrain, specifically the cranks and bottom brackets, as a potential upgrade area.

The stock cranks and bottom brackets are functional if not fancy. The steel bottom brackets were well adjusted to spin freely without play. While the riveted chain rings would require the stoker drive crank to be replaced eventually as the chain rings wore out, you could likely go thousands of miles on the provided cranks.

I came across a Truvativ Elita road tandem crankset with bottom brackets for a great price and thought it would make a worthwhile upgrade to the stock crankset and bottom brackets. 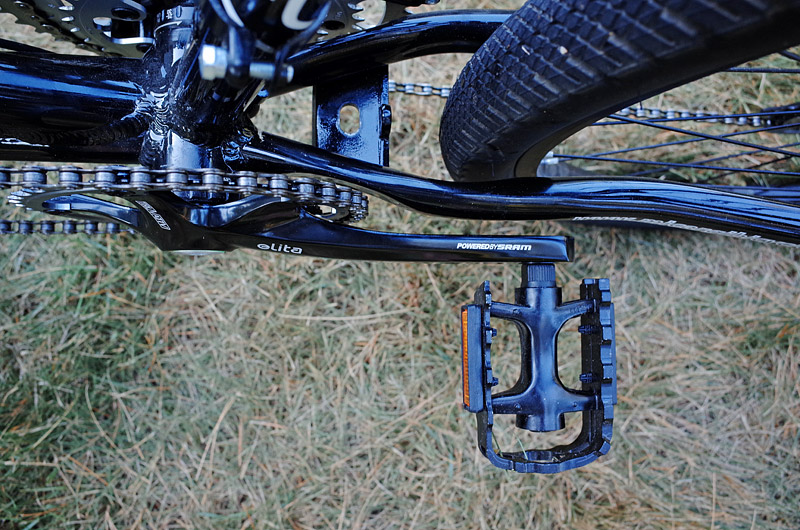 One difficulty that can come up when attempting to replace a mountain bike crankset with a road crankset is that frames designed for wide tires need wider chainstays and in some cases the narrower crank arms of the road crankset may not clear the chainstays without contact. Thankfully this was not a problem as the Micargi California frame’s chainstays are nicely curved allowing a road crank arm to clear easily while allowing for 2.35″+ tires.

However, the new cranks did come into contact with the provided kickstand and so, with mixed feelings, I removed it. 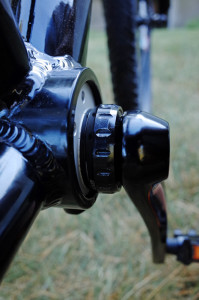 I did run into an unexpected clearance issue at the captain’s bottom bracket, where the external cups came into contact with the eccentric shell when tightened so the eccentric position could not be adjusted. The addition of a single 2.5mm spacer from a GXP spacer kit moved the cups away from the shell and provided clearance for proper function of the EBB. If both spacers are used the bottom bracket bearings bind before proper torque/engagement on the crank bolts is reached.

During the install I took out the eccentric and measured it’s diameter at 54mm. This means that a Bushnell wedge bottom bracket could be dropped into the shell. This is a relatively expensive change so I plan on using the stock eccentric as long as it performs well, but it’s nice to know the option is there.

Lastly, the change from 48/38/28 to 52/39/30 chainrings on the new crankset required that the front derailleur be raised a small amount and the slightly narrower chainline required adjustments of the limit positions.

All told, the switch to Truvativ Elita GXP cranks and bottom brackets resulted in 1.2 lbs of weight loss with an even 1lb coming from losing the heavy steel bottom brackets.

Next up – new wheels.