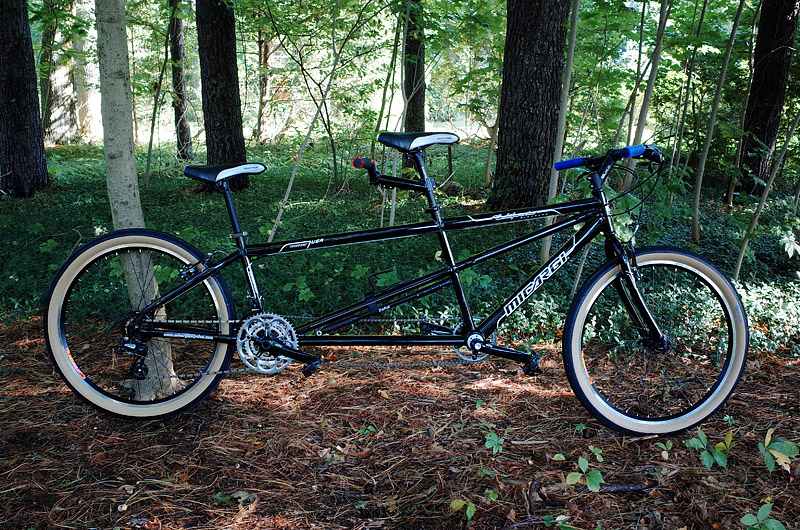 While the Micargi California is a great value in a 26″ wheeled tandem, mostly thanks to its well designed frame, it does have its weak points. The stock wheels are fine for casual use – we’ve ridden them on several short neighborhood rides and one longer ride on one of my usual road loops – but their single wall construction, 36 spokes, and low flanged hubs raise concerns for long term durability.

On their own none of these are particularly problematic but wheel durability, especially for tandems, depends on a lot of things including rider and luggage weight, terrain, riding style, tire width/pressure, and expected performance. A light team riding unloaded on smooth roads can use a relatively low spoke count and/or lighter rim without having to true it very often. Change some of those factors and you impact the durability so maintenance goes up.

Given our intended use for the tandem I wanted a wheelset that would handle any road (paved or not) and a light touring load with our ~325lb team. There are a number of pre-built or custom options to meet these requirements but I like building my own wheels for the extra options it gives in terms of choosing hubs and rims. I also wanted to keep the cost down.

I came across some Wheelmaster front and rear tandem hubs that looked promising as they were available in 40 or 48 holes and 135mm width to match the Micargi rear spacing. These have sealed bearings and aren’t serviceable but at under $60 for the pair the price is incredibly low. For our use and weight I chose the 40h hubs. The hubs are very nicely constructed for the price and the 60mm+ flange diameters are impressive. We’ll see how they hold up in the long run but I’ve seen reports from a much heavier team that has been happy with these hubs for a few years.

I considered using 650b rims either using disk brakes, which would require a new fork, or using longer reach V-brakes, but in the end decided to stick with 26″ and run a 2″ – 2.1″ tire giving the same diameter as a 650bx42mm. The introduction of Compass’s new Rat Trap Pass 26×2″+ tire certainly helped make the decision easier.

I was able to find some Velocity Aeroheat 40h rims for under $50 each. The Aeroheat is actually the same rim as the Dyad – for some reason Velocity uses a different name for the 26″ and smaller sizes – which has a very good reputation as a touring and tandem rim. Including spokes the new wheelset came in under $200.

The build went smoothly. I used Freespoke to calculate the required spoke lengths, using the 536mm ERD listed in their database for the Aeroheat and entering my own measurements for the hubs. The new wheels are a bit heavier than the stock wheels, which isn’t surprising given the stronger rims and additional spokes but should prove much more durable. 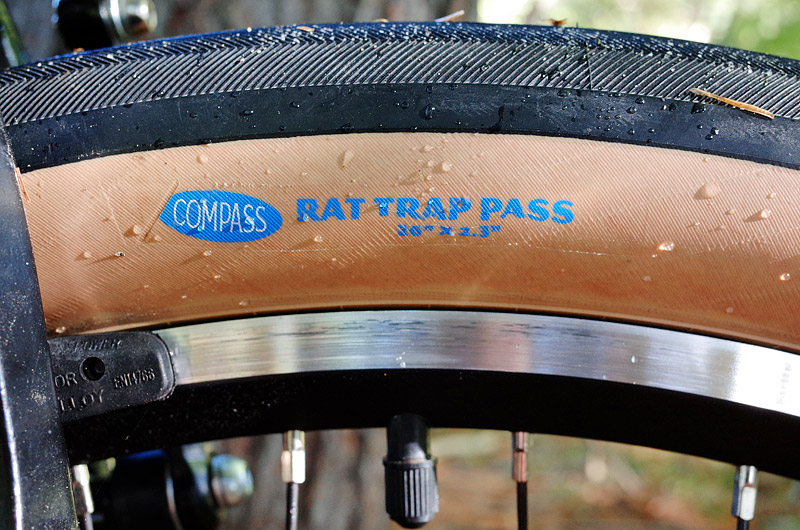 The Compass tires are very nice and, at 1lb each, unbelievably light for their volume. Despite their supple casings they were not too difficult to mount on the Aeroheat rims. I inflated them to 45 PSI to start but hope to be able to reduce the pressure to around 40 PSI. They measure 52-53mm on the 24mm rims but I expect them to grow a millimeter or two as they are ridden.

The real weight improvement comes from these new tires. The thick knobby tires shipped with the bike weigh well over 2lbs each and the switch to the Compass tires drops nearly 3lbs so our California now weighs in at 39lbs. Though I’m about to gain some of that back by adding fenders and racks.